Here’s a statue of a Templar Knight I entered into a Minecraft building contest, held by HC Server back in December of 2011. The theme for this contest was “Medieval” and we were constrained by a plot of land of size 36 x 51 blocks at sea level. Another constraint I had was the vertical limit of the map which at the time was still 127 blocks (63 from sea level).

I ended up winning the contest 🙂 and, If I remember correctly, the prize consisted of  getting special privileges inside the server, like the ability to fly around and also the ability to spawn most types of blocks, which was something you had to pay money to be able to do.

I used a program called Binvox to turn this free 3D model into voxels (blocks), and output a schematic file that I then import using MCEdit into a local world in creative mode. After that, I had to replace all the blocks (which were all of the same type) one by one, in order to add color and texture to the different parts of the model, including the clothes, the helmet, the red cross in the back of the shield, the sword and even the platform on which the statue is standing. Once I was happy with all the details I opened up two instances of Minecraft, one for the local world and the other for the server world. Then I started to go back and forth making a copy of the statue on the server, again block by block, and this time, without the ability to fly around.

After winning the contest I also made a really big, fully automatic, sugar cane farm on the same server. I used tons of redstone, pistons and water blocks to make it, and it looked like four tall buildings that reached all the way to the sky with a collection center in the middle. I only had to step on a plate and the whole computer would lag for like a minute because I was collecting hundreds of canes at a time. It was awesome.

Anyways, here’s a complete album with all the screen-shots I saved from of contest, it also contains images of the entries that won 2nd and 3rd place, they were a theatre and a village respectively. 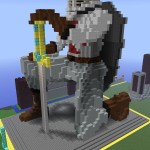 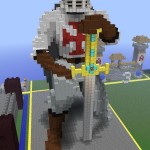 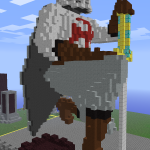 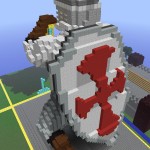 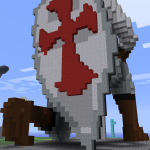 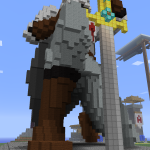 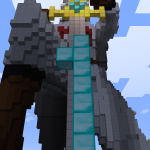 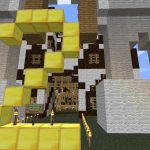 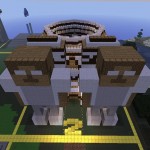 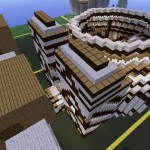 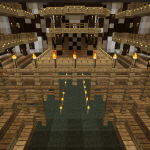 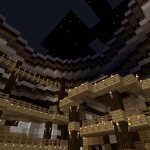 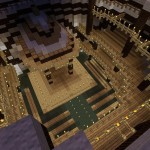 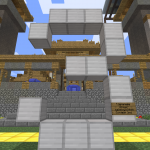 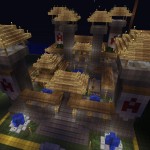 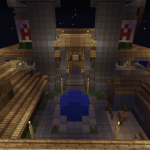 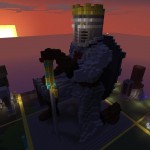